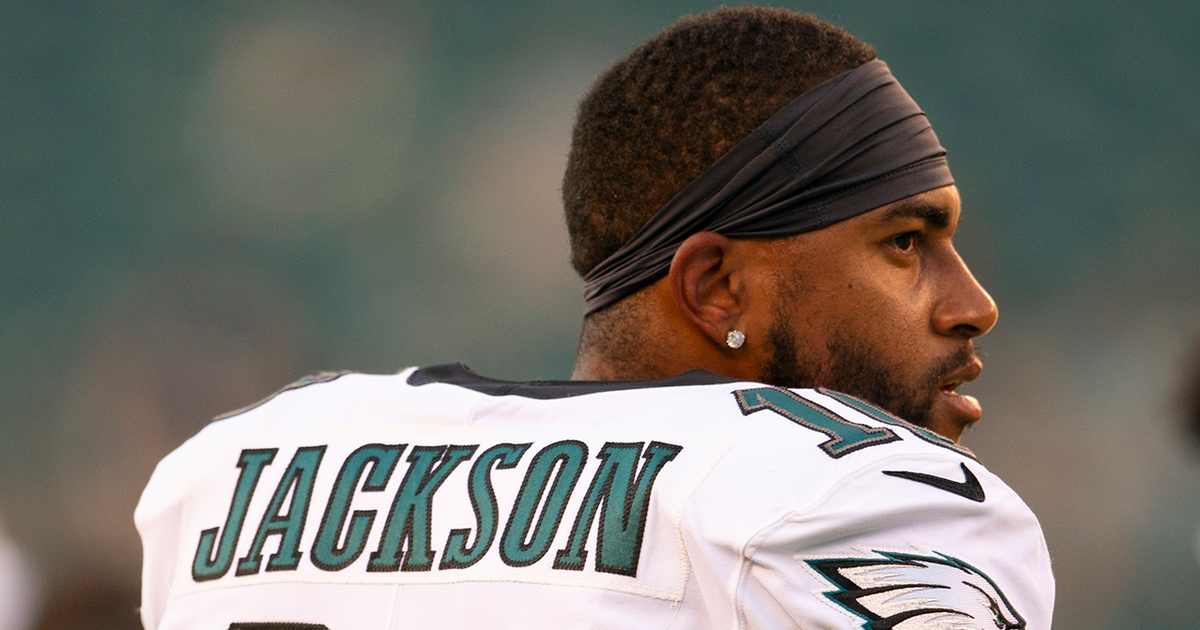 Jackson posted a quote on his Instagram Story on Monday which was attributed to Adolf Hitler, stating in part “the Jews will blackmail America, they will extort America, their plan for World Domination won’t work if the Negroes know who they were.”

Jackson then issued a written apology Tuesday evening, and the Chair of the Philadelphia Holocaust Memorial tweeted he had reached out to the Eagles receiver to host him for an educational tour, which Jackson accepted.

Just had aFaceTime call w @deseanjackson10 & @michaelgrubin DeSean apologized for his hurtful comments. As Chair of the @phillyholocaust memorial, I offered to host him for an education session & tour of the plaza & he accepted. Confident we can turn this into a positive together https://t.co/y04xobo7Oc

Jackson also shared a video apologizing for his comments.

Despite the apology, many strongly criticized Jackson for his anti-Semitic post.

ESPN’s Elle Duncan, who previously gained national attention for her incredible “Girl Dad” story in the wake of Kobe Bryant’s tragic death, gave a powerful monologue stating that hate in any form simply cannot be tolerated.

“There is no hierarchy when it comes to bigotry.”

Emmanuel Acho, a teammate of Jackson’s on the 2013 Eagles, tweeted there is no excuse for Jackson’s comments.

DeSean Jackson’s comments were offensive and uneducated; however, ignorance is no excuse for prejudice of ANY kind.

Google is too free for this to keep happening. We must all learn more and be better. Period.

On Wednesday’s Speak For Yourself, Acho expanded on his thoughts.

“This is a topic, Marcellus, that we had to address. We would both be remiss if we were to have our own platforms where we talk about racial reconciliation, but then, when it comes time to talking about prejudice that may not directly affect us, we sweep it under the rug.

Steelers offensive tackle Zach Banner, who was among the first NFL players to react to Jackson’s comments, spoke of hurtful preconceived notions he was exposed to in his own upbringing and the need for education, love, and support, while also reflecting on the tragic shooting at a Pittsburgh synagogue in 2018.

This video is to transition from the incident, and move forward as a community. Not to harp on @DeSeanJackson10 mistake, but to progress by educating ourselves. We can’t move forward while allowing ourselves to leave another minority race in the dark.#Equality pic.twitter.com/MnLnCCYzQL

“I loved what Zach Banner said in response to Jackson’s comments. As a Jewish person, it was heartening to see a player with a platform and influence speak out against anti-Semitism.

“But I was disappointed that more athletes didn’t follow his lead, because hate — even when it doesn’t directly affect you — is insidious. The more people speak out, the more comfortable others feel joining in. And the more people join in, the less acceptable hate becomes.

“Being vocal and supportive goes a long way toward making change.”

I’m Jewish, and the one thing I’ll say is that anyone fighting for social justice should be fighting for everyone. You can’t truly be against anti-Semitism without being against racism, and it goes both ways

Anti-Semitic rhetoric is terrifying, and when I’ve walked into a synagogue for the high holidays with a heavy police presence outside to protect from bomb threats, it’s chilling. But the police haven’t targeted me for the color of my skin. We all have to be on the same team here

Late Wednesday night, the Twitter account for the Auschwitz Museum tweeted at Jackson, asking him to consider visiting the site of some of history’s most heinous crimes to educate himself.

.@DeSeanJackson10 Consider following & visiting @AuschwitzMuseum where we commemorate the victims & educate about the tragic history of #Auschwitz, a place that became a symbol of Hitler’s hateful ideology & vision.

Edelman explained that “anti-Semitism is one of the oldest forms of hatred” and offered to meet Jackson at the United States Holocaust Memorial Museum and the National Museum of African American History and Culture, both in Washington, D.C. (WARNING: The video contains a Jewish slur Edelman says he has been called before.)

Unfortunately, not everyone corrected Jackson for his offensive comments.

Former NBA player Stephen Jackson originally defended the Eagles wide receiver on Tuesday, then did so again during an Instagram Live on Wednesday.

As a journalist, I should clarify to avoid confusion with those who don’t know: What Jackson is saying is not true. He’s perpetuating propaganda that’s been a core of anti-semitism for a long, long time. https://t.co/viClaQnyCb

That defense prompted Stephen A. Smith to passionately speak out against the anti-Semitism and Stephen Jackson’s comments, saying they take away from the important work around racial inequality.

“He’s veering away from what the ultimate goal is.”@stephenasmith strongly disagrees with Stephen Jackson’s comments defending DeSean Jackson, saying it’s a distraction from issues in the Black community. (via @FirstTake) pic.twitter.com/IwZ4iUhDl5

Wednesday evening, Jackson appeared on CNN to attempt to clarify his statements, stating he “used the wrong words”:

“I could’ve switched up, but that’s the end of it. I know I love everybody, and that’s how I always stand and I’m not going to let anybody demean my character.”

On Thursday’s Undisputed, Shannon Sharpe detailed a conversation he had with Stephen Jackson, one day after also speaking to DeSean Jackson.

“You and D Jax were wrong. You’re a powerful voice now, and people are looking to take pot shots and pick you off. Don’t sabotage what you’ve built.” pic.twitter.com/ImMreKQMFR

Team owner Jeffrey Lurie and GM Howie Roseman, who are both Jewish, reportedly spoke to Jackson on Tuesday, according to ESPN, with Lurie expressing his “deep disappointment.”

The Eagles have not announced any discipline for Jackson, and according to multiple reports, the team has not discussed a suspension or termination.