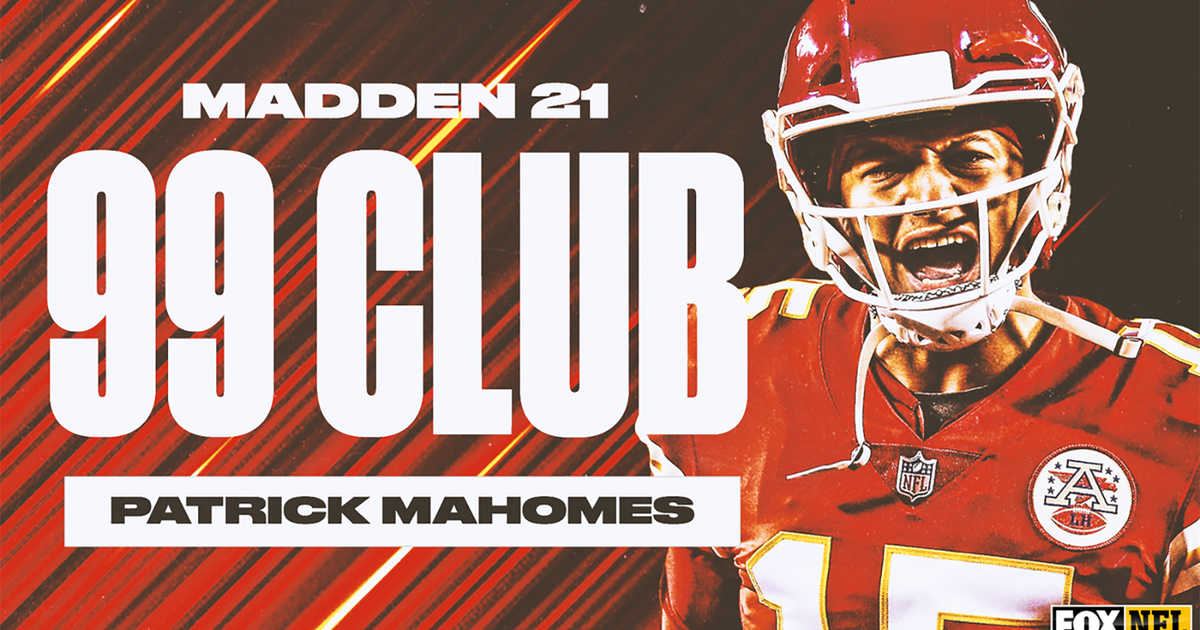 Two months out from the start of the new National Football League season — is it just me or is that countdown clock ticking scandalously slowly? — you can add an extra notch to the already extraordinary level of expectation awaiting Patrick Mahomes the next time he throws a football.

Not many players ever get to a point where the start of a campaign smiles at them with a mischievous smirk that says nothing except the ultimate victory of a Super Bowl title will be considered good enough, but Mahomes is there, on that esteemed pedestal.

This week’s Madden 21 ratings release was the latest reminder of what we now expect from Mahomes. A coveted 99 can be both a blessing and a curse. It says that in the opinion of the game makers you’re as good as it gets, but also sets your par score at not just great, but cheat code great.

Add to that a new contract on a scale that would make even Jeff Bezos’ eyes water, the status of Super Bowl champion and MVP, and Mahomes has a lot to live up to.

Do you think he can do it? More to the point, would you really be willing to bet that he can’t?

“In my first year, what annoyed me more than anything is that people thought it was just my arm,” Mahomes said in an interview with GQ, published this week. “Everybody just talked about my arm instead of talking about how I was making the right decisions, going to the right place.”

That quote was one of the more telling lines in Clay Skipper’s magazine piece. Because, at the time, after Mahomes’ incredible 2018 season where he outstripped everything that could possibly have been demanded of him and took the Kansas City Chiefs to the verge of the promised land, virtually everything being said about him was positive.

Taking the subtle slights and turning them into fuel are how nice guys are able to summon the ferocious inner fire to propel themselves to greatness. At least, in this case apparently.

The Madden ratings are interesting because that 99 mark, in a sense, might be one of the easier things for Mahomes to back up, because it pertains solely to his on-field performance. Can he perform at that level? Yes, of course, because he just did.

Mahomes is officially a member of the 99 club 🔥 @PatrickMahomes @Chiefs @EAMaddenNFL pic.twitter.com/D5qdPKUCcE

He just produced a season — and a postseason — to reflect that level of excellence. There is no complaint to be had with the other 99ers, either. Aaron Donald’s marauding tackling, Stephon Gilmore’s shutdown coverage and Christian McCaffrey’s two-way dexterity fairly earned them that number, and Mahomes displayed a similar kind of positional dominance.

It is good to be in the 99 club. For everyone else, this week is Motivation Week.

Mahomes Magic is back in the #99Club‼️

The Madden reveal is one of those funny days on the calendar, one that shouldn’t matter but in many ways legitimately does. A player’s rating is “just” a number. It is “just” an opinion. It doesn’t translate into extra points, extra yards, extra contract money.

But it is there, it is something, and because of how much the players care about their rating, it is a bona fide part of the NFL landscape.

On Tuesday morning, Baltimore Ravens defensive end Calais Campbell was tweeting at Madden staff members, trying to track down what the respective rating figures had been for each season of his career. Players from every team posted reactions in real time once their number was out.

Yoo @EAMaddenNFL what do I have to do to get my madden rating for each year of my career?

Lamar Jackson drew a sharp intake of breath when his rating was revealed on ESPN, having hoped for an even higher score than his whopping 94. Several rookies including Tua Tagovailoa, Justin Herbert, Jalen Hurts and Jordan Love tried to play it cool on a video link with Hall of Famer Steve Young, but you could spot the excitement or disappointment when various numerics either went their way or otherwise.

Aaron Rodgers perhaps has the most right to be disappointed, with an 89. Cam Newton, already with a point to prove after signing with the New England Patriots, now has extra bulletin board material with a 78. Everyone is chasing Mahomes, with Russell Wilson’s 97 being the closest among QBs.

Here are the Top 10 @EAMaddenNFL Ratings for QBs 👀

“For all the unknowns that swirl in and around the NFL, one thing about its future seems rock solid: It will center on Patrick Mahomes, who, at 24, is already the face of the league,” Skipper wrote.

That much is true. But with the other analytics, how do you define whether Mahomes’ career matches up to what so many think will happen? The contract, $503 million over 12 total years is so remarkable that it is virtually impossible to quantify right now, and its overall value over time will be dictated by factors far beyond Mahomes’ control. Things like how much top QBs are five years from now and fluctuations in the salary cap will play into it.

The nature of American sports also dictates that Mahomes will be judged by how times times he can get the Chiefs the kind of hardware they crave and whether he can turn the franchise into a dynasty. Yet while there is willingness and commitment on behalf of the ownership to do just that, and though he is the most important player, things can happen that he has no impact over. Inopportune injuries and the like can torpedo the best laid plans.

FOXBet has the over/under on Mahomes reaching the Super Bowl during the course of his contract at 2.5, and you can make an argument for either case.

.@PatrickMahomes has agreed to a 10-year extension to stay with Kansas City, per @AdamSchefter. 👀

How many more titles will the @Chiefs win this decade? 🏆

“The smart money obviously would be somewhere in the middle,” FOX Sports’ Nick Wright said, when asked if Mahomes’ career trajectory is more likely to mirror Tom Brady’s six rings or Rodgers’ one. “I think he will end up with a nice, round, four Super Bowl championships. But if you are telling me it is going to be one of the two doors, the obvious and only plausible choice is for number one. It would be an all-time sports upset if Patrick Mahomes never wins another Super Bowl.”

Mahomes is a transcendent, transformational player. His style and method will have an effect on so many things, from what talent scouts are looking for in prospects to how defensive schemes are contracted. Everything is set up for him to be the QB of now and of the future.

Which is the more likely path for Patrick Mahomes: Tom Brady’s 6 Super Bowls or Aaron Rodgers’ 1?

“The obvious and I think only plausible choice is Door No. 1. It would be an all-time sports upset if Patrick Mahomes never wins another Super Bowl.” — @getnickwright pic.twitter.com/8etJNbojvx

He has all the tools to do it, yet with every step of that journey there will be an army of contenders vying to usurp him. And they all just got an added shot of motivation.