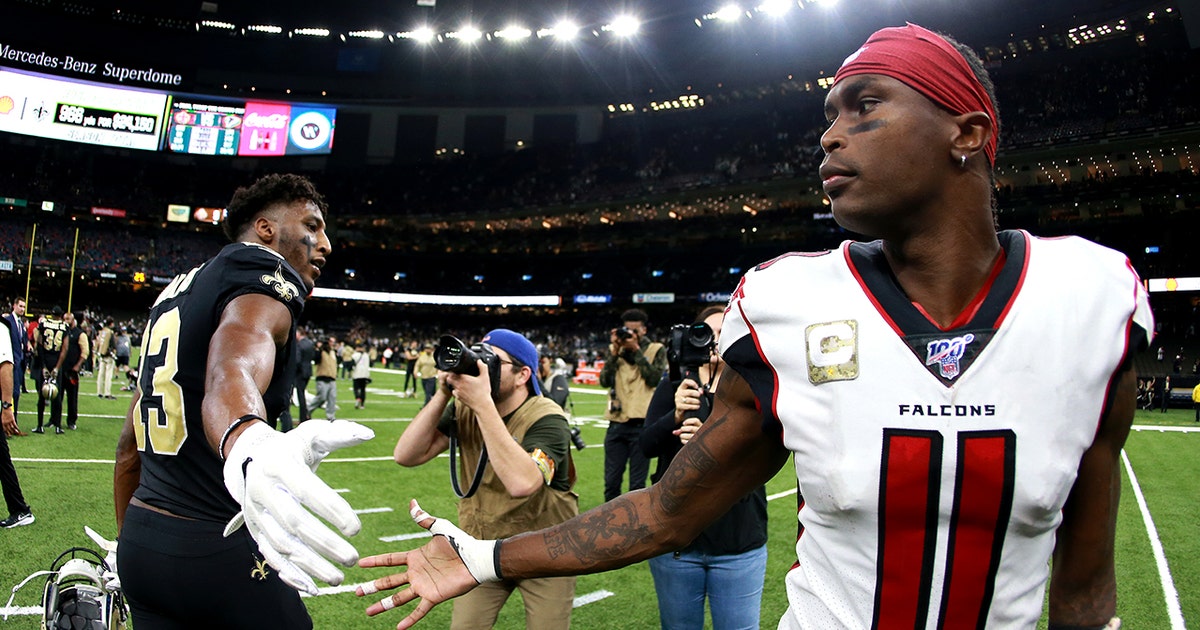 The NFL currently has some of the most talented wide receivers it’s ever seen, from Michael Thomas to DeAndre Hopkins and Odell Beckham Jr.

But in the eyes of NFL executives, scouts and players, one pass-catcher rises above the rest: Julio Jones.

In a poll conducted with 50 NFL executives, scouts and players, ESPN ranked the top 10 wide receivers for this upcoming season. pic.twitter.com/AnAXYtAHxJ

In addition, in April of this year, he was one of four receivers named to the NFL 2010s All-Decade Team.

Interestingly enough, not long ago, a few of the receivers on the list debated who was better amongst themselves, specifically Hopkins and Thomas.

Back in May, Thomas not-so-cryptically proclaimed himself the best wideout in the game.

Top of the top

For what it’s worth, Thomas is not far off, considering he finished second to only Jones in the ESPN poll.

Hopkins is a 4-time Pro Bowler and 3-time First Team All-Pro selection, one less than Thomas and Jones combined.

Still, Jones’ consistency has seemingly set him apart from the pack, considering he has finished in the top 3 in receiving yards for six consecutive seasons.

On Friday, ESPN’s Jeremy Fowler, who helped conduct the poll, said that Jones was somewhat surprisingly the runaway top choice among the NFL members he spoke to.

“I went into this process thinking Michael Thomas would push Julio Jones for that No. 1 spot. It didn’t happen. Jones got more than half the first place votes. One NFL coordinator told me he’s simply an Avatar. There’s no one like him … The only knock on him is he’s 31 years old. Occasionally they rest him, he takes a few plays off. But most people thought that he was just more of a threat than Michael Thomas downfield.”

However, former Heisman Trophy winner and Super Bowl MVP Desmond Howard said that not only is Jones not atop his list, he’s not even in the top 2, due to inconsistencies catching and scoring the ball in recent years.

“My problem with Julio Jones is in the past three seasons, he’s dropped 17 passes. That ties him for first in the league. And he hasn’t had a 10-touchdown receiving season since 2012. He’s gonna catch a lot of balls for a lot of yards, but he’s not getting to the endzone at the same clip as some of these other receivers. I think Michael Thomas should be No. 1, then I’d put DeAndre Hopkins at No. 2.”

I absolutely love Julio Jones for what he can do on the field…but dang he drops too many perfectly thrown passes…particularly slants.

We’ll see if Jones can continue his streak of dominance this upcoming season – and also clean up a few minor issues in the drops department – while Thomas and Hopkins, who now has a bonafide superstar quarterback, remain hot on his heels for the title of the game’s best wideout.