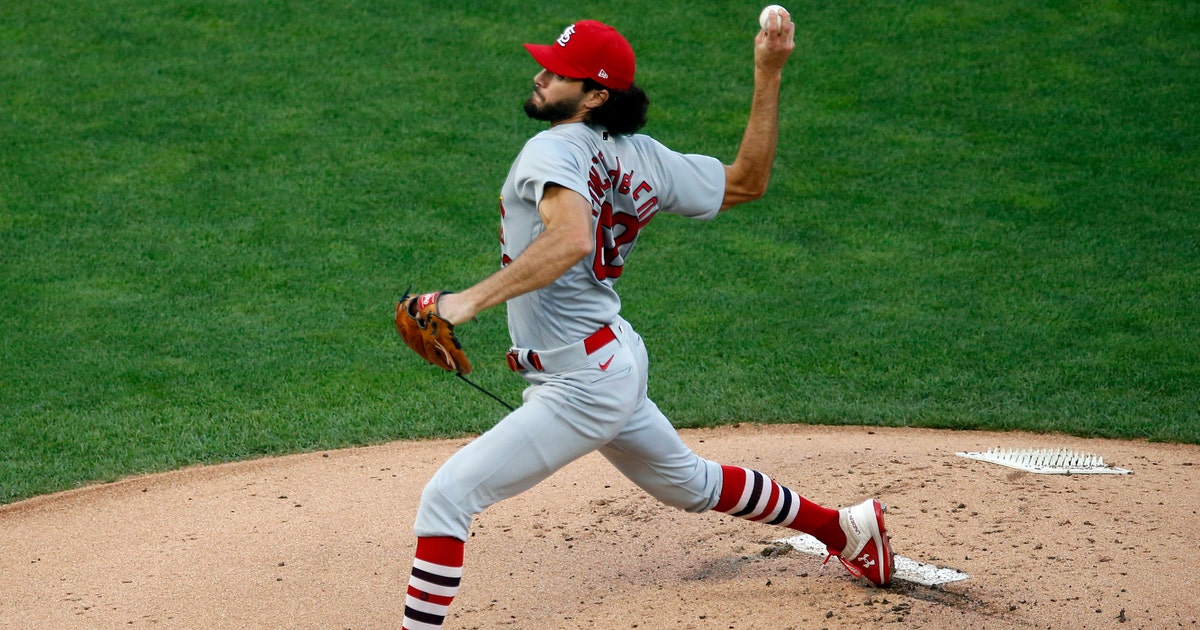 MINNEAPOLIS — Coming off major surgery and currently the oldest pitcher in the major leagues, Rich Hill sure looked smooth and spry on the mound in his debut for Minnesota.

“It feels like it’s 18 again,” said Hill, who pitched five scoreless innings as the Twins beat the St. Louis Cardinals 3-0 on Wednesday night.

Eddie Rosario homered, Nelson Cruz hit an RBI double, and Alex Avila, another Minnesota newcomer, added an RBI single. Taylor Rogers pitched a perfect ninth for his first save, and the Twins finished a two-game sweep to improve to 4-1.

“I’ve been on a lot of good teams,” said Hill, who has 12 postseason starts, including two World Series appearances with the Los Angeles Dodgers. “I don’t take it lightly: This is a very good team.”

The 40-year-old Hill needed only 68 pitches to pick up his first victory for the team that signed him this winter with the assumption he’d be ready around midsummer after his recovery from elbow surgery. When the coronavirus pandemic put baseball on pause for four months, Hill was available for the rotation right away.

The left-hander even had his start pushed back by four days out of caution for some inflammation in his shoulder, and he was in fine form, allowing two singles and a walk.

With Kenta Maeda, Homer Bailey and now Hill, the Twins have won three straight games behind starting pitchers in their first appearance with the team.

“Rich has just a really interesting way of going about pitching. His stuff is pretty incredible. He’s got the fastball that he can ride and do different things with it. Then he’s got that curveball that he uses basically whenever he wants and however he wants. It’s really fun to watch him do it,” said Twins manager Rocco Baldelli, who at 38 is younger than Hill and Cruz.

The Cardinals, after winning their first two games against Pittsburgh, have scored four runs on 15 hits over a three-game losing streak.

“There is some frustration when you come in and don’t put together as many consistent at-bats as you’d like, and the ones you do put together, you don’t have a lot to show for it,” manager Mike Shildt said.

Daniel Ponce de Leon (0-1) struck out eight over 3 2/3 innings. He gave up two hits, three walks and all three runs as a fill-in for Miles Mikolas, who was declared out for the season due to forearm surgery.

“As a starting pitcher, you’re meant to go deep into games, so if I were to grade myself, I wouldn’t give myself a good grade,” Ponce de Leon said.

The Twins, wearing the all-baby blue uniforms the franchise sported for road games in the 1980s, improved their run differential to plus-16. The defending American League Central division champions lead the major leagues with 7.2 runs per game.

Daniel Ponce de Leon wasn’t too happy with his command tonight: “If I compare myself to how I was pitching all (summer), this is easily the wildest I’ve been, fastball command-wise.” #STLCards pic.twitter.com/OhTbcdKieM

NOT OVER THE HILL

Not until Hill joined Cruz this season had the Twins included two 40-year-old players on their Opening Day roster, and the last time they had such a duo on the team at the same time was 2004 with catcher Pat Borders and pitcher Terry Mulholland. Atlanta, with pitchers Bartolo Colon and R.A. Dickey in 2017, was the last major league team with a 40-plus pair.

“That’s one of the things that inspires us younger players on this team, seeing two players like them,” Rosario said.

Cruz, the second-oldest active hitter in the major leagues behind Albert Pujols, went 7 for 13 with seven runs, two doubles, three homers and 10 RBIs in the opening series at Chicago. He leads the majors with 11 RBIs.

Four of the seven oldest players in baseball were at Target Field for this series, with Cardinals pitcher Adam Wainwright and catcher Yadier Molina, both 38, on the list at fifth and a tie for sixth. Pujols, the three-time National League MVP for the Cardinals who’s now with the Los Angeles Angels, is the oldest in the game. Pitcher Fernando Rodney, 43, would bump everyone down a spot if he signs with a club this summer.

Cardinals: Rookie Rangel Ravelo, who had 39 at-bats last season, was the DH for his season debut. Matt Carpenter pinch hit for Ravelo in the eighth.

Twins: CF Byron Buxton was held out as planned as a precaution following his season debut on Tuesday, two weeks after suffering a sprained left foot. … 1B Miguel Sanó, who is 1 for 14 with six strikeouts, was pulled after the sixth inning for rest.

Cardinals: After an off day Thursday, the team’s second in four days, RHP Jack Flaherty takes the mound on Friday night to begin a three-game series in Milwaukee.

Twins: RHP José Berríos will start on Thursday night against Cleveland to begin a four-game series.