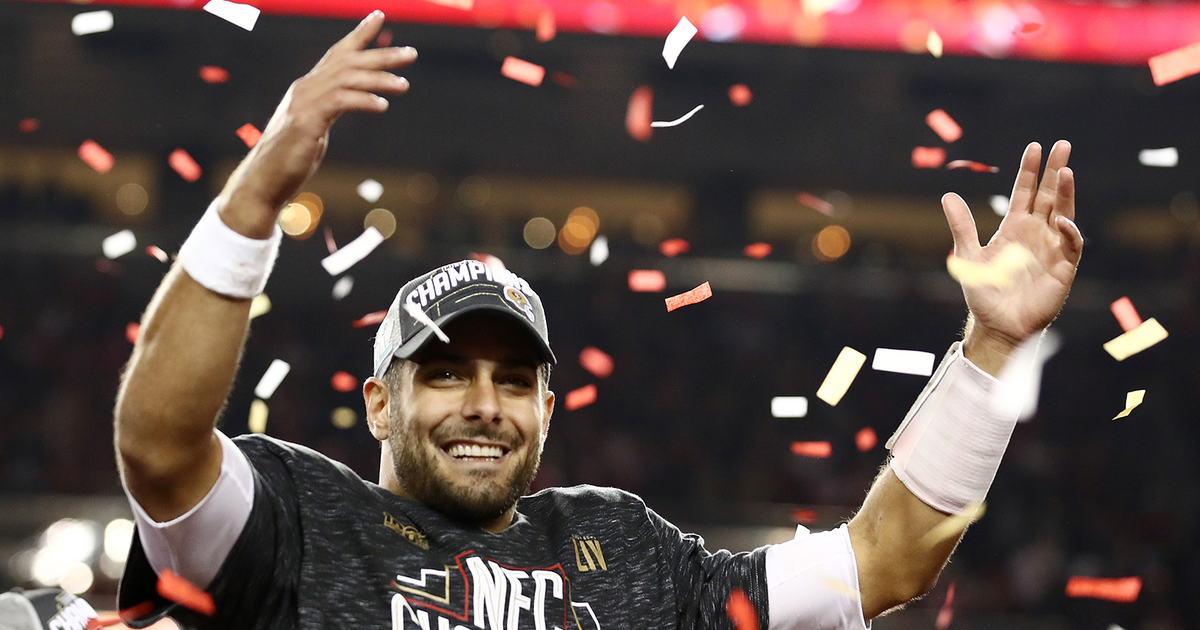 What were you doing five months ago today? Watching the Super Bowl, of course.

What was Jimmy Garoppolo doing? Nearly winning it.

“You’re gonna be down, you’re gonna be hurt, but it’s supposed to.”@BrettFavre shares some advice with Jimmy Garoppolo after losing the Super Bowl. pic.twitter.com/ENjuUIXglj

And yet, bizarre as it sounds, Garoppolo doesn’t have the kind of nailed-on, locked-and-bolted, treasury-backed hold on a long-term future with the San Francisco 49ers you might expect for a guy who was a few throws from being a world champion.

Before Tom Brady resurfaced in Tampa, the 49ers undertook a close, multi-day examination of the former New England Patriot – and of their own incumbent – and whether bringing TB12 “home” to the Bay Area was a worthy investment.

“Take a deep breath. Jimmy Garoppolo is fine. He’s going to get San Francisco back to several Super Bowls and Tom Brady is 43… It makes no sense.” — @ColinCowherd pic.twitter.com/oANt4BshHO

Garoppolo says he didn’t take it as a slap in the face, and the San Francisco front office have launched a public relations offensive to point out it wasn’t intended that way, but it still creates an interesting dynamic.

“Can you imagine applying this to any other walk of life?” FS1’s Nick Wright said on First Things First. “An old fling hits you up on Facebook, ‘You want to leave your wife for me?’

“‘Why are you saying this out loud? Why do you keep telling America, (general manager) John Lynch and (head coach) Kyle Shanahan, that you are in like, not in love, with your quarterback?”

“The 49ers considered replacing a guy with someone who is 15 years older than him. The only reason you do that is if you think deep down your QB is not good enough.” — @getnickwright pic.twitter.com/5ZvId5gsxt

When asked if this is a make-or-break year for Garoppolo, Sports Illustrated’s Albert Breer wrote this week: “On the surface, this is a fair question, given the tire kicking San Francisco did with Tom Brady. And it’s also fair given the structure and relative affordability of Garoppolo’s contract.”

Garoppolo has three years remaining on his deal, but none of them are guaranteed, and they come at market-reasonable price points of $25.2, $25.5 and $25.6 million.

That means that, if things play out a certain way, Garoppolo could become a strong trade asset, with there being just $2.8 million in dead cap money.

“We felt like it was a responsibility to take a look [at Brady], because that’s a very unique situation,” Lynch told SI. “We did that, we talked with Jimmy, and told him just what we did. I think he appreciated that.

“And the great news is we’re more convicted than ever that Jimmy’s the guy that we want to work with going forward. We feel like he’s got a lot more in him.”

Take that however you like, but to me, the last phrase speaks volumes. They think he has a lot more in him, and whether he remains “the guy” may hinge on him unleashing that potential.

The 49ers paid Garoppolo seven games into his 49ers career because they believed he would blossom into one of the best quarterbacks in football. That’s what they are still looking for.

We asked and you answered…

The 2019 Comeback Player of the Year is @49ers QB Jimmy Garoppolo, as voted on by the NFL on FOX fans! pic.twitter.com/kJvqhGdBS5

Garoppolo threw for 3,978 yards and 27 touchdowns last season, but was intercepted 13 times, a concern which he has himself admitted he is committed to rectifying. He’s a good quarterback, but he’ll need to show he can be a great one to satisfy the 49ers’ hunger.

It poses another intriguing question. Would Garoppolo’s stock going into this season actually be higher if the team hadn’t made it to the Super Bowl, where he outplayed Patrick Mahomes for three quarters before ultimately falling short?

“Jimmy Garoppolo’s win percentage is actually better than Patrick Mahomes… In a minimum of 25 starts, he’s No. 1 in league history at over 80%. 23-5 to be exact.” — @ToddFuhrmanpic.twitter.com/2I48lBpymx

How different the narrative could have been.

Garoppolo was not electrifying against the Kansas City Chiefs in Miami, but for three quarters, he was purposeful, calm and mightily efficient. But toward the end of the contest, Garoppolo connected on only three of 11 throws and yet, even when the Chiefs took a late lead, had a shot to win it all.

Deep into the fourth quarter, Garoppolo had Emmanuel Sanders wide open and headed for the end zone on a post route, but missed him with an overthrow that might otherwise have shifted destiny.

Did Jimmy Garoppolo get exposed?

“Jimmy G got exposed of how good he is and how good he can be… Jimmy G outplayed Patrick Mahomes for most of that game.” — @MarcellusWiley pic.twitter.com/iqJoIpMJpn

That might have been the moment the doubters started to find voice. The murmurs have only increased since. Perhaps, in its own weird way, playing on the biggest stage did the most harm to Jimmy G.

Are we really discussing the merits of a player who went 13-3 last season, one might ask? It seems absurd, but football is a business, and ambitious teams make big, bold moves when they feel it suits their pursuit of the ultimate prize.

Being really good isn’t always enough. Anyone can be the fall guy in that process — even a guy who was about to win the Super Bowl, but didn’t.